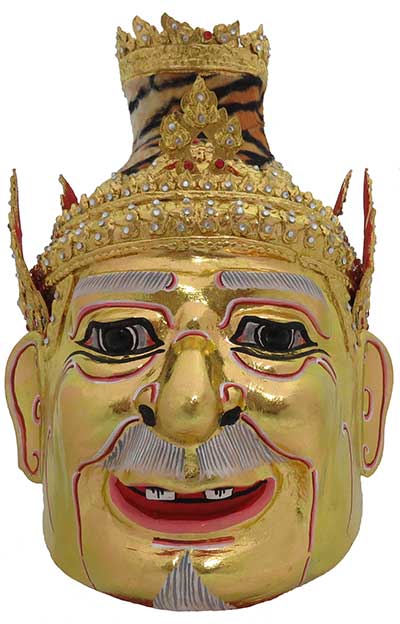 Lersi, Ruesi, Shamans, Hermit sages originated in the forests of India and Nepal many thousands of years ago. There is just a few left in Thailand who still follow the strict way of a Ruesi Lersi. We only know of one Ruesi or Lersi. They have to leave there worldly goods behind them. No money, car, motor bike, house or family. That means no children, wife or sex or alcohol. The list is quite long. Also you will see from images that they have long hair and always skinny due to the fact they do not cut there hair, just eat fruit and starve themselves for long periods of time, like fasting to focus there minds on meditation. It is believed that Lord Buddha was a prince of a rich royal family. Who left all that behind him on the journey of enlightenment and became a Lersi / Ruesi. Then he went on to start Buddhism which he found enlightenment through meditation but before that he starved himself near to death to experience enlightenment.

There are different Lersi / Ruesi, some deal in medicine, massage, and Sak Yant tattooing. Lersi / Ruesi thousands of years ago were village medicine men who practiced healing using natural plants, roots and herbs gathered from the forest. In order to develop themselves spiritually, they had to become detached from the villagers and so they spent many years deep in the forest, which led to them being called Hermits. This gave them the freedom to practice their art.
These Shamans were around long before Buddhism, with Brahmism being the religion of the times. Then Lord Buddha was born and he had contact with Ruesi. It is depicted on wall paintings in temples that Sharmans actually visited Lord Buddha when he was a child. A Ruesi is seen standing in front of the child wearing his Tiger skin robe foretelling the people of Lord Buddha’s future. It is believed there were 4 main Ruesi who had reached a high level of magic who could predict the future.

It is believed that the Ruesi compiled the Sacred Vedas of the Hindu religion and it is these Vedas which the Brahmist (In Thai Brahm) religion holds as the basis of all knowledge. At that time, Brahmism was the main religion of an area that included India and Nepal. The knowledge within the Sacred Vedas was exclusive to the Ruesi and they transformed that knowledge and power by inscribing Yantras, sacred designs that could tap into hidden powers. At this time Yantras came in the form of a piece of cloth, or even a shirt, to be worn to give protection. They were kept at home to ward off evil spirits. These Yants (sacred geometrical designs) were incorporated into the Khmer culture and subsequent cultures as Siam was formed and then what is now known as Cambodia, Vietnam and Laos.
It is said that the Lord Buddha himself studied with Ruesi then he realized this would not take him to the path of enlightenment, rather just a higher level of consciousness. The word Ruesi can be compared to a wizard in western cultures, someone who possesses supernatural powers. It was said that the Ruesi could leave their bodies at will and foretell the future.
The art of tattooing Yantras originated in the Khmer Empire, soldiers were often covered in different designs to protect against a variety of weapons. As time went by, the art of Sak Yant became entwined in Buddhism and each culture added something to create what we have today.
As for Thailand, it is known that in the Ayutthaya period, government officials were tattooed on their wrists to show their status. The popularity of Sak Yant grew steadily, most rural Thai men would have at least two or three Yantras tattooed somewhere on the body. Sak Yant became entwined with Buddhism and there have been many Yantras created by Ruesi and Sak Yant Masters for all kinds of reasons. Soldiers and Muay Thai fighters began to use Sak Yant as a form of protection when in combat. Indeed it is written that several army chiefs who were tattooed with theses Yants, had miraculous escapes from injuries in battle. To date there are many different Yantras, all with their own unique design and with specific powers (see Sak Yant meanings).
In present times, the Ruesi still play a role in Thailand, though they would appear outwardly as any normal person, they still practice the ancient art of Sak Yant. Sak Yant seems to be growing in popularity among Thais and there are many Sak Yant masters throughout Thailand.
It is important to understand that the wearer of a Sak Yant does not automatically receive its protection. One must adhere to certain principles, as well as trying to attain the things one desires. Only then will the magic work.