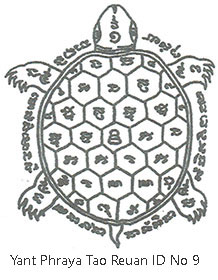 It is believed that Buddha was once incarnated as a turtle. During that lifetime, the turtle grew to be the size of a house, hence the name Dtao Reun (turtle house). This Yant offers the bearer wealth and prosperity, good luck and a long life. It is also a very lucky animal in Chinese traditions. It is said that this Yant can help one to eliminate emotional suffering. 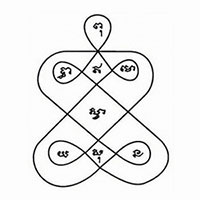 This Yant is most popular with young Thai men as legend says it renders the bearer immortal as they cannot be killed with weapons. Many servicemen, soldiers and sailors as well as mafia types like to have this Yant for protection.

This Yant protects the bearer against illnesses, diseases and danger. It is often seen on cloth inside the threshold of a house (Pha Yant). 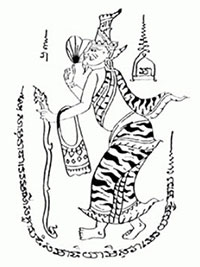 As the name suggests, this is a very high level Yant for Ruesi. The bearer of this Yant has a certain responsibility, to always think good thoughts. If this is done, the bearer can expect a good life blessed with good fortune at all times. However, if the bearer thinks bad thoughts then this Yant can lead the bearer down a bad path. As a double edged sword, the power of this Yant depends on who is using it. 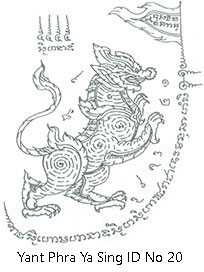 This is the Thai lion (Sing) carrying a flag which signifies victory. Legend has it that the bearer of this Yant achieves immortality and always defeats enemies. 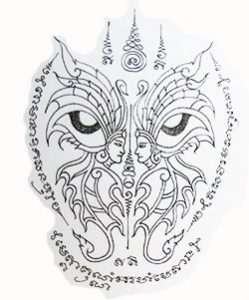 This Yant is said to boost attraction and is very popular in the field of entertainment, especially singers, musicians and actors.

The gecko is a creature found in just about every dwelling in Thailand. There are many Yants based on the gecko, each for a different reason. Mostly they are connected to charm, attraction and evasion.

The two tailed gecko Yant is inscribed with a Khata down the middle of its back. It is considered to be very lucky. This Yant is good for shopkeepers, other businesses and general finances. The traders will put one in the money basket for good fortune. Also gamblers are known to respect this Yant.Often made with metal or on cloth (Pha Yant). 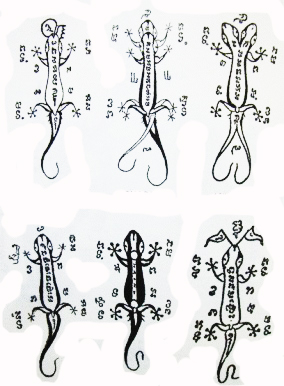 This Yant is very popular with sales people as they believe they will never end up with unsold stock. It also boosts mercy, kindness and compassion, giving the bearer great popularity. A perfect Yant for social events.

The Hongsa is a mythical bird, similar to a peacock or a swan. It is common among Yant designs and this Yant represents a previous incarnation of the Lord Buddha. The bearer of this Yant is said to possess great oratory skills and can convince people easily. It also represents good fortune and is very popular as a cloth Yant seen hanging in shops.

This Yant is of the Maha Saneh variety and is known to increase attractiveness which is useful, especially in romantic encounters. It is also said to be effective in job interviews, press conferences or important meetings. This Yant will help if the bearer speaks the truth and is sincere so it can be helpful to sales people and others who rely on the power of speech.